From Atrocious Gameplay Miraheze
Jump to navigation Jump to search

Caution: Not only does this page contain spoilers galore, it also touches on heavy subject matter. Reader discretion is advised. 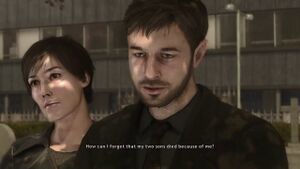 The Tears in the Rain ending from Heavy Rain. An example of a bad ending.

A Bad Ending is an ending with bad events happening after the player either makes a wrong choice, don’t do an objective correctly, take the wrong path, don't get crucial items, etc. Although they're quite rare in modern games, they were quite common in classic video games, gaining infamy for their unnerving and almost scary qualities.

Why Most of Them Suck

List of Video Games with Bad Endings (WARNING: Read at Your Own Risk)

Should we add Heavy Rain here? Most of the bad endings are rather unsettling.

one month ago
Score 1 You

It seems like a lot of these "bad" bad endings are just artistic intent, not something worth criticizing.

For example, Super Paper Mario's bad endings aren't bad because they're bad endings, but it's phrased that "what doesn't help about those three endings, is that both Tippi and Queen Jaydes will warn you about those choices". That's the whole joke, it's about the lack of agency most games give you- there's no reason to say "no, I don't wanna wear my helmet in space", but the fact the game lets you get a game over for that is an attempt at humor. Contrast that to, say, Paper Mario 64, where you can tell Kooper to buzz off, but he'll just insist you bring him along until you say yes. There IS one point in Super Paper Mario where a bad ending can be annoying, though. In the prologue, Merlon asks you to save all dimensions; if you keep telling him no, he's like "Oh... I guess that's it then..." and you get a game over. What sucks, though, is that because you haven't gotten a chance to save yet, you have to play through the entire intro again- an unskippable cutscene that has already taken up to half your total play time once you get back to Merlon.

The others are fine, because you get the game over, have a laugh, then you pull up your save and run back in. The most offensive thing about it is that you might not like the style of humor, and that's not an easy ground to argue for; I could see a lot of people liking Rayman 2's ending specifically BECAUSE he traded a whole civilization for greed. I would've gotten a kick out of that, as a kid.

one month ago
Score 0

Even though this page feels butthurt and needs to go, You saying "Super Paper Mario's Endings are not bad because they are bad endings" is beyond fucking idiotic, contradicting, and Hypocritical. Bad is Bad and Good is Good no matter where, when, who, what, or why. Tippi and Queen Jaydes warning the players about the choices they are doing being the jokes does not make your comment less idiotic.
Permalink
Retrieved from "https://atrociousgameplay.miraheze.org/w/index.php?title=Bad_Endings&oldid=2268"
Categories:
Cookies help us deliver our services. By using our services, you agree to our use of cookies.