The 100th page on the Atrocious Gameplay Wiki! 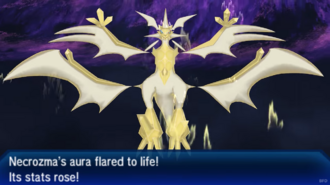 And you thought Totem Kommo-o was brutal. This is also a good way to use Zoroark.

Ultra Necrozma is Necrozma's third and strongest form that was introduced in Pokémon Ultra Sun and Pokémon Ultra Moon, and a boss fight in the game. It is the main boss of Megalo Tower from the Ultra Megalopolis, the ninth Pokémon boss character and overall the twelfth boss of the game.

Though not as frustrating as Akio Asakura's final boss battle in Wangan Midnight R, this boss fight is notorious for its infamous difficulty spike. As it is not only the hardest boss in the games, but it is considered to be the hardest boss battle of the entire series.

Why It Sucks As A Boss

15 days ago
Score 0
I want to thank my Magnezone for beating this boss for me. I was lucky to have the TM for Toxic with me.
Permalink
Retrieved from "https://atrociousgameplay.miraheze.org/w/index.php?title=Ultra_Necrozma_(Pokémon_Ultra_Sun_and_Ultra_Moon)&oldid=2543"
Categories:
Cookies help us deliver our services. By using our services, you agree to our use of cookies.